Evaluate the Risk Posed by Solar Storms with PowerWorld Simulator

PowerWorld has developed an innovative tool for analyzing the potential impact of geomagnetic disturbances (GMD), using our familiar power flow and transient stability platform. PowerWorld Simulator GIC may be the most accessible tool in the world for power system planning and operations engineers to readily assess GMD risk posed to their systems.

The GMD threat is real. A 1989 event caused widespread outages on the Hydro Quebec system, but this event was much smaller and less intense than a 1921 event that occurred prior to widespread electrification. If such a super storm strikes today’s power grids, outages and equipment damage could be unprecedented. A February 2012 NERC report[1] contains several recommendations, including development of procedures and training for managing the effects of GMD events and enhancement of simulation tools and models to support the ongoing study of GMD impacts.

Power systems are vulnerable to time and spatial variations in dc voltages caused by GMD. Induced currents flow through circuits formed by a high-voltage transmission line, a grounded transformer, the earth, and another grounded transformer at the far end of the transmission line. The dc bias can force transformers to saturate for part of the normal ac cycle, causing harmonics, equipment damage, failure of protection schemes, reactive power loss, voltage instability, and potential large-scale voltage collapse. 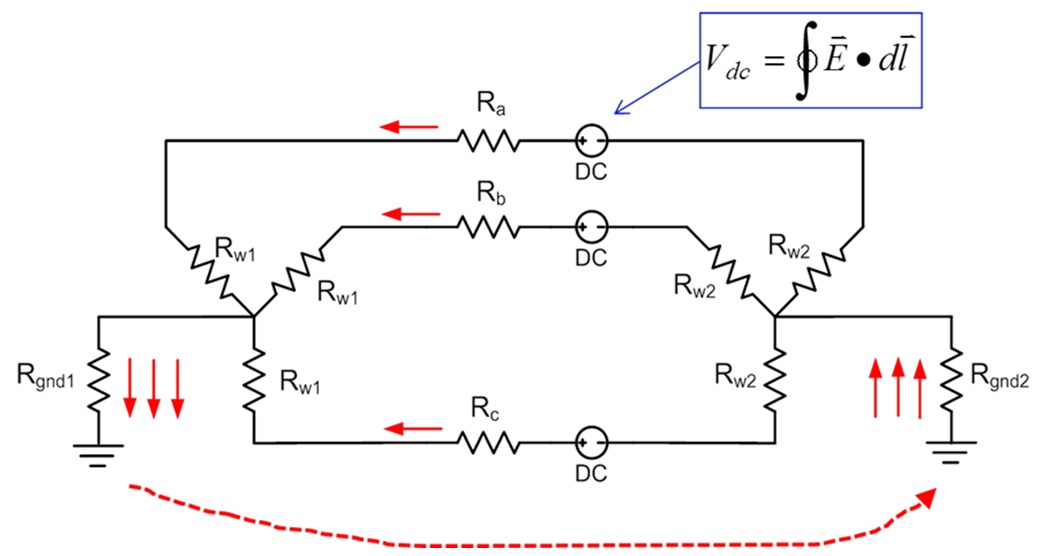 Effect of GMD can be modeled as DC sources in transmission lines.

By integrating GIC calculations directly within PowerWorld Simulator, power engineers can readily see the impact of GIC on their systems and consider mitigation options.

GIC calculations use common power flow and fault analysis parameters, such as:

These parameters can be estimated or defaults applied when actual values are not available. PowerWorld can provide geographic coordinates for the three primary North American planning models.

GMD-induced electric fields must also be provided, corresponding to a simulated GMD event or storm scenario. These may be industry data sets or auto-generated by Simulator. NERC TPL-007-1 specifies study of a Benchmark GMD event, consisting of a geospatially uniform geomagnetic disturbance where the electric field magnitude varies with local earth resistivity and geomagnetic latitude. PowerWorld Simulator can quickly auto-generate uniform electric field models, with the option to automatically scale the magnitude according to the parameters of the TPL-007-1 Benchmark GMD Event. (See this knowledge base article for earth resistivity scaling models for the US and Canada.) 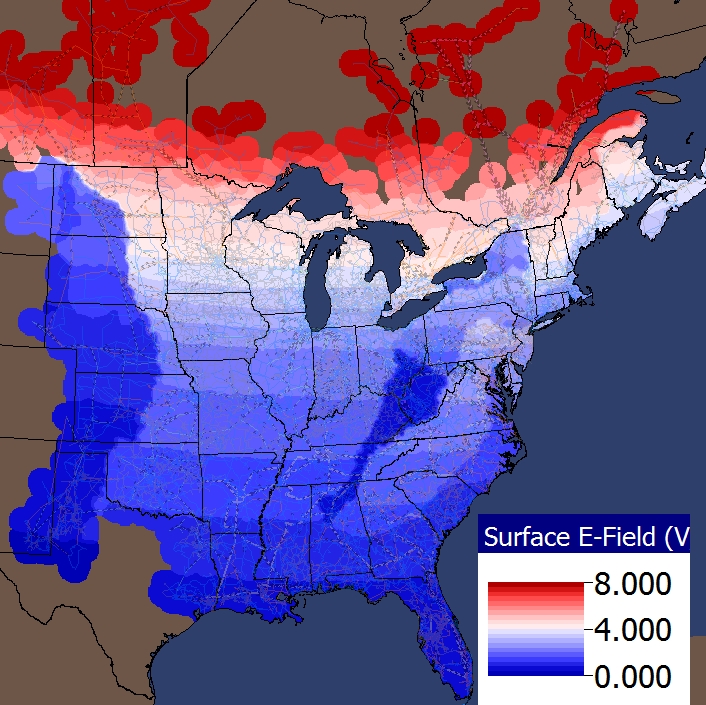 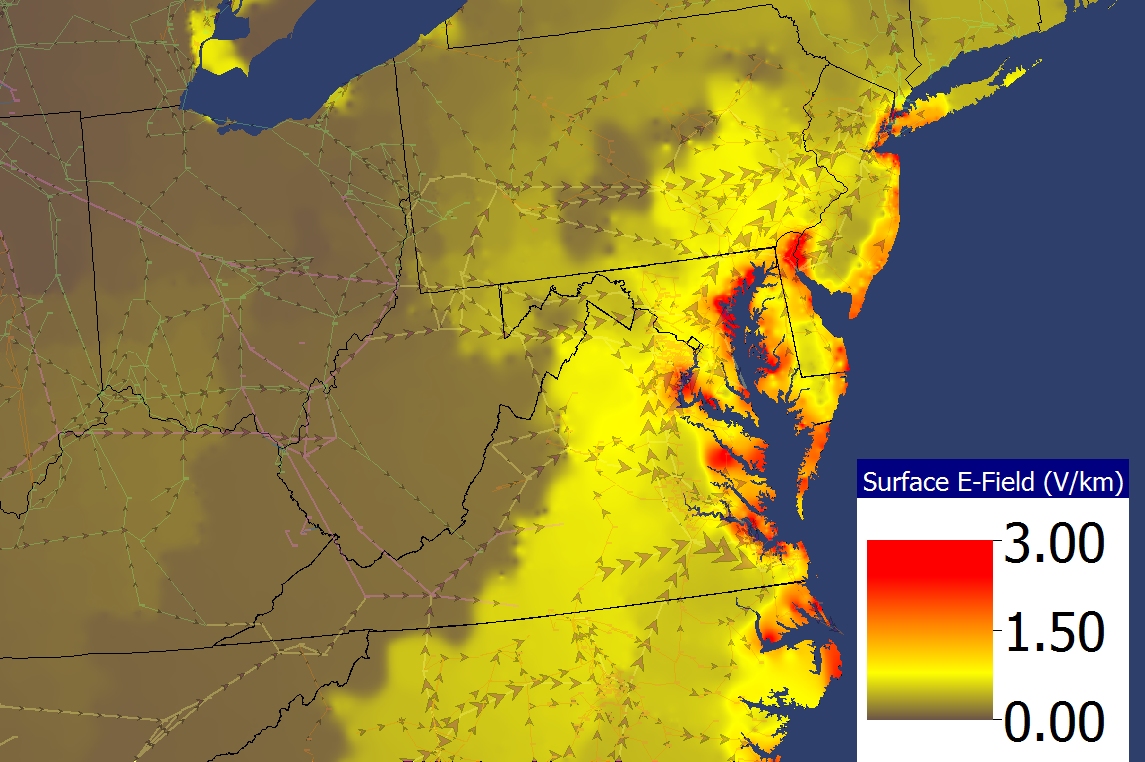 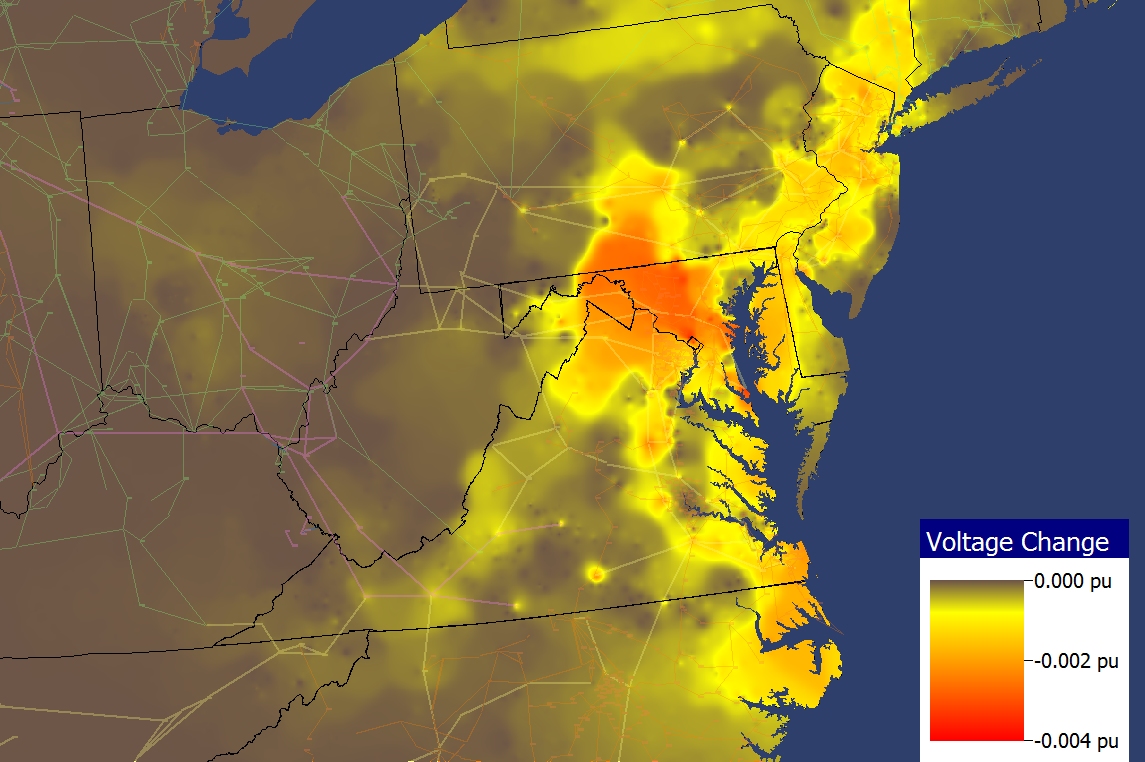 Simulated per-unit voltage drops for the same period during the March 12, 1989 disturbance. Results are illustrative only; actual model parameters will improve accuracy.