Available starting with PowerWorld Simulator 13, the Optimal Power Flow for Reserve Markets (OPF Reserves) extends Simulator OPF to model simultaneous energy and reserve markets. Simulator OPF Reserves helps you find the optimal economic operation of the system taking into account both energy and reserves bids. In the reserves market, generators and loads bid for the ability to increase their active power output (or reduce load active) in the short term. Generators and load resources can provide, and have separate controls to model regulation, spinning, and supplemental reserves. For each resource, the regulation reserve controls can act as a single bidirectional control or as separate up and down regulation reserves.

Several small sample cases are tailored especially for evaluation of Simulator OPF Reserves. These cases may be used with the free 13-bus demo version of PowerWorld Simulator. 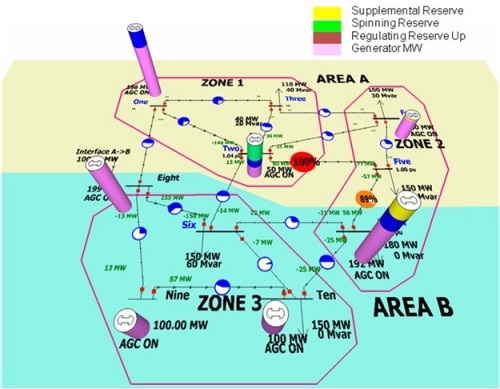 3D view with generator stacks showing relative capacity and how it is allocated between MW production and various types of reserves.