Voltage Compensation can be modeled in a few different ways in PowerWorld Simulator.  First, there are Rcomp and Xcomp values which can be specified with the various synchronous machine models such as GENROU, GENSAL, GENTPF, and GENTPJ.  In addition, you can add specific other generator models to represent compensation: COMP, CCOMP, COMPCC, CCOMP4, and IEEEVC.

Without voltage compensation, the input to the voltage regulator (part of the Exciter model) is the per unit magnitude of the terminal voltage of the generator. When you include compensation, then instead the signal is processed through som algebra using the terminal voltage and current and some impedance values.  As an example, consider the simplest model called COMP.

One support issue that PowerWorld staff has encountered in working with our customer’s cases is that sometimes value of Xe are too large.  As an example case we got from a customer had the following small generator. 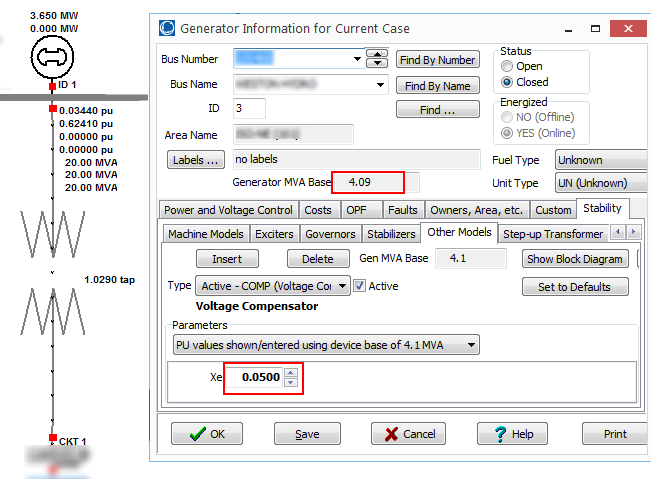 The problem is that the step-up transformer’s impedance is only 0.62.  In this particular example, we calculated the driving point impedance looking out from the terminal bus of the generator into the system and it was only 0.91 per unit.  This means that the voltage which is being controlled by this exciter is literally past the edge of the system.  This means that it will be impossible to control it and it will make the response of the generator unstable.  In this particular example a plot of the terminal voltage of this generator during a particular event looked as follows. 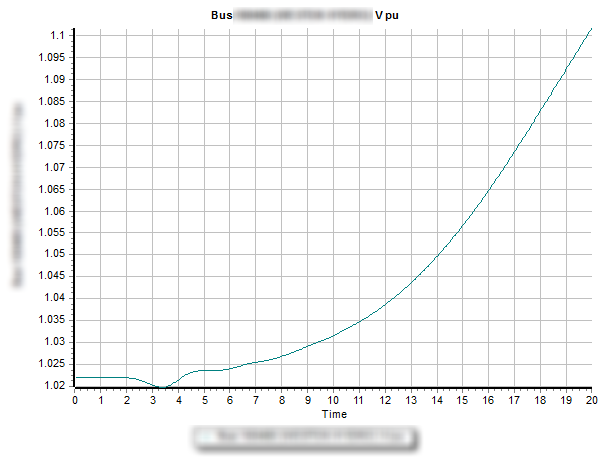 It’s very easy to miss input errors like this because this little generator is extremely small relative to rest of the system and unless you’re looking for errors like this you won’t see them.  A good way to find input errors like this is to run your system out for 30 seconds or so and look at the Results from RAM\Minimum/Maximum Values.  That is how we found this data error in this particular example.  We had run a generator outage in one part of the system, but the largest voltage deviations that were seen were a couple 1000 miles away!